Reproduction and Lifecycle of the Horseshoe Crab: 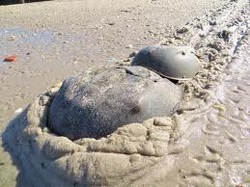 Female, with attached male, digging into the sediment
The eggs are laid in large clusters, around 2,000 to 4,000. After laying one cluster the female pushes forward 10-20 cm before laying the next batch. Some scientists speculate that females deposit several clusters in order to spread the risk of predation. Other scientists speculate that egg development is affected by crowding and so females spread the eggs around.

In many ways the life cycle of a horseshoe crab is similar to that of other arthropods. However, the lifecycle of a horseshoe carb begins in the intertidal zone which is a very rare among marine invertebrates. Nesting so high on the beach is a costly behavior. Exposure to the air and sunlight is physiologically stressful and maybe even damaging.  Also, the crabs can be easily overturned by the waves and the gulls attack overturned crabs by feeding on their gills and removing their legs as well as the large muscle at the base of their tails. The benefit of such a risky and costly behavior could be that eggs are less likely to be eroded from the sand by waves and wind when they are higher up on the beach.

Horseshoe crabs produce typical arthropod eggs: centrolecithal with a large densely packed yolk surrounded y a peripheral layer of egg protoplasm. However, difference between typical arthropods and the horseshoe crab is that on the sixth day of development a transparent membrane lifts off the surface of the embryo and swells up to twice the original diameter. After this the developing embryo can be seen rotating within this sphere. Eggs develop in the sand for 2 to 4 weeks and go through four embryonic molts.  Eventually they hatch into trilobite larvae. The larvae remain in the clusters and do not feed for several weeks. They continue to wait until the next tidal inundation allows them to swim into the sea. Sometimes the larvae may even overwinter within the beach. Some studies have found that there is an apparent link between the rate of development and temperature, with hatching occurring sooner when the eggs are incubated at higher temperatures. Once in the sea, the free-swimming larvae will molt into tiny horseshoe crabs within a few weeks, again the rate of development depends on the temperature.

Like other arthropods, horseshoe crabs grow new shells when they increase in size. This process is called molting. The shell splits along the perimeter rim of the prosoma and allows the horseshoe crab to emerge.  The horseshoe crab increases in size by a rapid uptake of water.

Most studies have concluded that there are at least 18 growth stages in the horseshoe crab lifecycle that encompass various stages of embryo, larvae, juvenile, and adult.

Botton, ML and Shuster, CN. A contribution to the population biology of horseshoe crabs, Limulus polyphemus in Delaware Bay. Estuaries. 1985; 8:363-352

Laughlin, R. The effects of temperature and salinity on larval growth of the horseshoe crab. Biological Bulletin. 1983; 164:93-103